The Crimes That South Africans Fear Most

A survey about crime in South Africa conducted by Statistics South Africa focusing on crime stats sa has listed the crimes which South Africans are most afraid to fall victim to in the country.

Looking at the crime data released by the SAPS in September 2015 for the reporting period 1 April 2014 to 31 March 2015, the most common reported crime in the country – excluding drug related crime – is house robbery and burglary at residential premises, which saw just under 254,000 cases open in 2014/15. The survey data shows that South Africans at large are apparently well aware of this, as most citizens accurately perceived this to be the most common crime in South Africa.

When it comes to crimes most feared, however, things look slightly different. While housebreaking/burglary and home robbery [ie robbery when the occupants are at home] and street robbery were perceived to be the most feared crimes, the actual fear of murder and sexual assault also feature highly.

The official S.A. Police Crime statistics for crime in South Africa for the period 2014/2015 shows that the listed most feared crimes are indeed a huge concern. It is important to look at the crime rate in South Africa over a longer period of time. Often one tends to compare the current crime stats with the previous year and when there is a decline in a specific category, one gets excited and see it as an improvement.

There are many factors that one must take into consideration when evaluating crime statistics, which include the economic climate, social issues in South Africa, unemployment, political climate, social cohesion and the ability by law enforcement agencies and the judicial system to deal with crime in South Africa.

To produce a report on crime statistics in South Africa is like travelling a pothole ridden road. It is sometimes seen as the clash of the intellectuals as ever more views from experts, commentators and the media run up against each other.

Crime statistics are seen as the “official figures” whereby the government and society are measured by. It gives us an indication of the social evil we face and about the ability of the government and public services to contain it and the causes of crime in South Africa.

For that reason, there is no magic formula and a given is that crime statistics are based on cases reported and cases registered as a result of police action.

Crimes committed but not reported or detected are obviously not included and there are varied opinions on what that figure might be. Government, civil society and the public at large make decisions based on “accurate” crime stats which has a huge impact at various levels. They impact on broader government and social policy to decisions we make as individuals on where we live, home security, where we go out to, safety at home or where we allow our children to play.

In South Africa official crime statistics are categorised as;

The following graphs illustrate the rates of crime in South Africa over the last ten reported crime stats periods, namely 2005/2006 to 2014/2015.

The focus is on the Top 5 most feared crimes in South Africa. 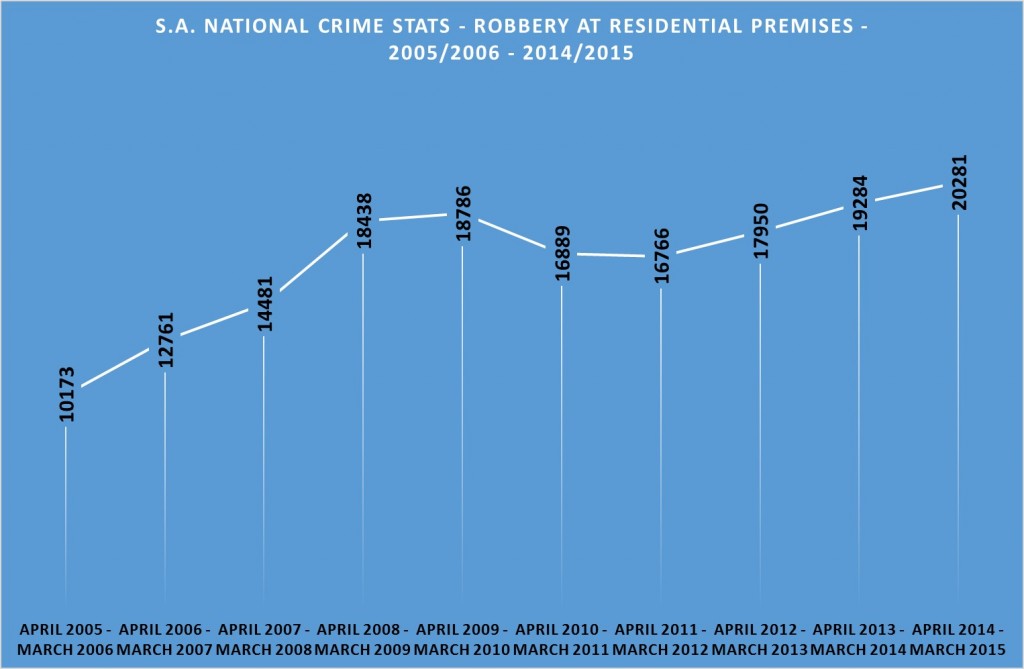 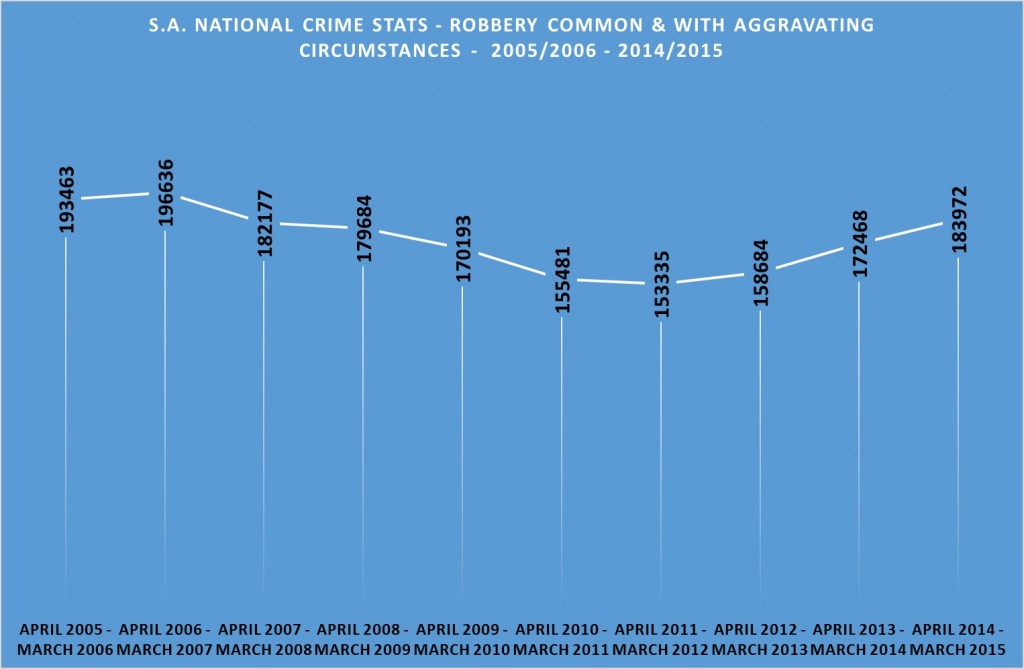 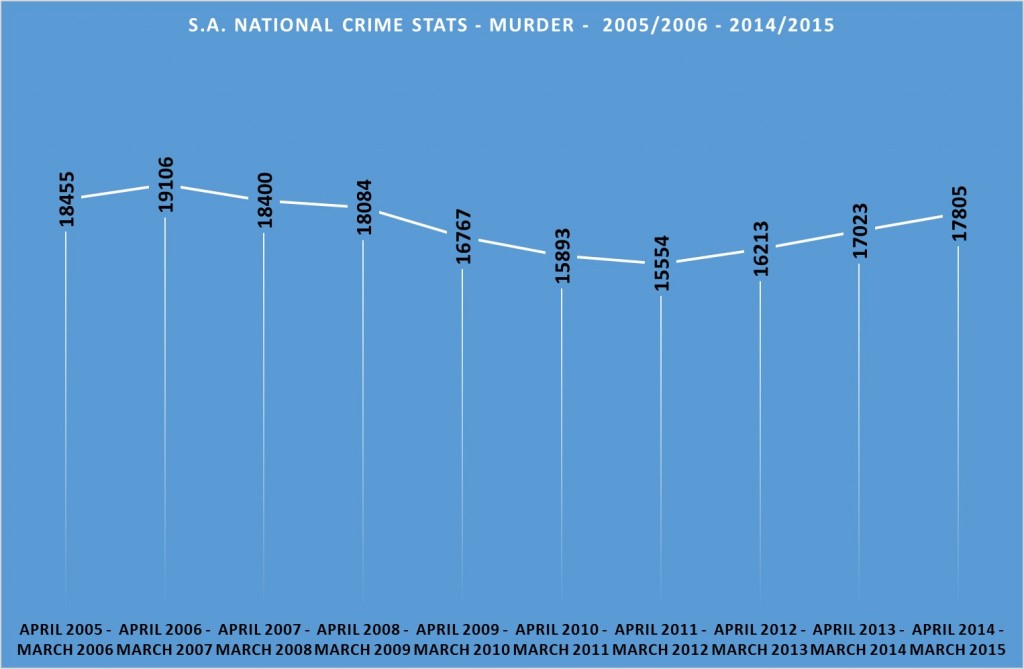 There are various sources reflecting international crime statistics and making comparisons based on numerous criteria of which crime per 100 000 population seems to be the most common. Comparing crime internationally is however very problematic due to the reporting rates and periods of crime, the accuracy of such reporting and how crime is defined and categorised in different countries.

In 2013, on murder and housebreaking/burglary crime figures alone:

It is therefore not surprising that South Africa is referred to as the Murder Capital of the world. 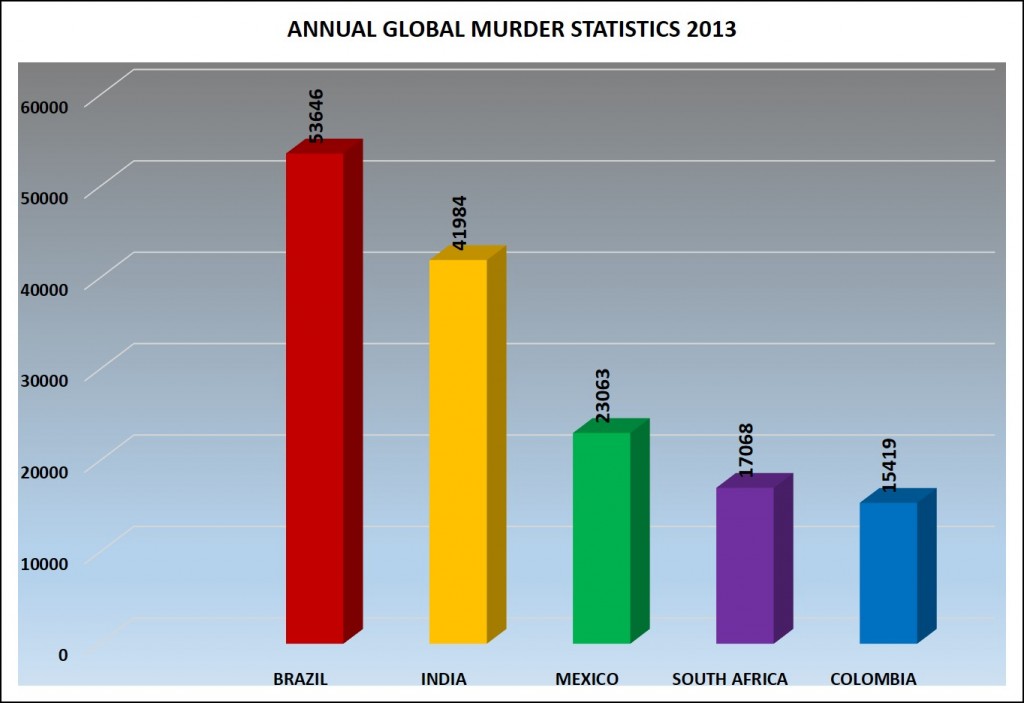 It is in the interest of civil society that government, local government and public figures are kept accountable. The release of crime statistics is currently done in arrears which makes advanced planning very difficult.

“All police stations in South Africa capture and update their crime stats daily and by the next morning it is verified by the station commander and/or designated official and uploaded into a cloud environment. The data is then accessed and verified by the provincial commissioner’s offices within 24 hours and designated head office personnel does final verification within 48 hours of the upload. The statistics are then released online within 72 hours after being captured”

Given the technology available on the market this should be a walk in the park. All that is required is the will to do it. By doing this we will become pro-active and be a step ahead of the criminals by doing proper planning based on current data and not historical statistics.

It is important for everyone to rally behind our law enforcement agencies and their crime fighting initiatives. Through community based structures and forums we as ordinary citizens can make meaningful contributions in preventing and combatting crime and violence in South Africa.

A note about the author: Hein Crocker was a Lieutenant in the South African Police and has also spent a number of years in the Security Industry. He is currently the Managing Director of SQAS-SA, a consulting and training service provider to the commercial fleet industry. Hein has an absolute passion for crime prevention and community service and is also the chairman of Afriforum in Oudtshoorn.